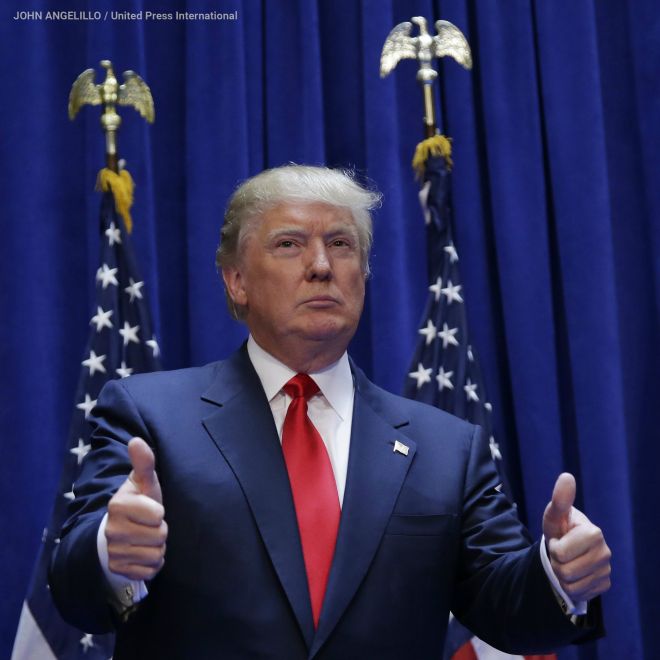 When you make a media spectacle of shaking hands with your frontrunner Donald J. Trump and you forcefully have him sign an agreement to not run third party, (and I do say forcefully for you hovered over him and made him sign it or else there would be no fair campaign….that is what you did.)  For all Trump asked for was a fair campaign.

Well, as the campaign progressed and more unfair things were done, Trump bucked it up and kept the agreement honorable.   That is who Trump is.  Then, it got worse, and then low and then the lowest of the low….that is when it was obviously and blatantly no longer fair.  So, GOP, would you regard Trump as breeching if he decided to no longer honor his agreement for you have obviously breeched your part of it all…daring to launch an historic, never before campaign attack against one front runner?  And you had the balls to announce it?  Oh for shame. Proudly stating it is aimed at the one you have a “Fair” agreement with?  What liars you are and what fools you are. What folly!

You will get the Hillary voters all fired up, finally something working in their favor, and you will fire up the losers vote…but you will NEVER, EVER DESTROY THE FRONT RUNNER’S VOTE WHICH IS NOT JUST A VOTE IT IS A COMMITTMENT TO MAKING AMERICA GREAT AGAIN.

You truly Mr. GOP whatever, underestimated the voter here.  In voter, I am speaking of the TRUMP VOTER . The one who knows the games, the drills, and will never vote for any other GOP candidate no matter what you do. I, myself will vote for Micky  Mouse before I vote for any other than Trump!

You have just ruined the club you call a party.  You are a private entity and it is now obvious what you all do.  So puppet controllers for the puppet masters.  Go to ….your elections on your own. I am done with you and America wants Trump and we will vote for Donald Trump either third party or on your lousy ticket.  You, however, are done. Broken, and over. You have had your last party, enjoy it!