In a world where citizens who were given the name useless eaters and all the entitlements that go with it by the establishment elite in secret meetings….do we expect any less that such useless eaters are but pawns to push and shove and eliminate at the whim of those who have whims?

What is different this very day is a man who according to establishment rule should not be present for he is a billionaire and billionaires must keep; the rule of the land in order to persevere in business and monetary gain according to the rules set forth by the establishment elite who do such things.

That man WHO DEFIES THIS AND IS INSTEAD STANDING FOR THE PEOPLE  is DONALD JOHN TRUMP!

He has put all his life essence on the line, all of it from his fortune, his retirement, his family, his reputation, his name brand…down to his very being in order to keep America….America.  He has boldly stepped out against an angry establishment of great merchants of the earth in order to stand by each and every one of the citizens of the United States who have ears to hear and eyes to see all the things he has shown and said are of truth!

Meanwhile the Brits listened, they looked at their nation and saw all the evil that was pushing at them inside their borders.  It was the same that Trump was warning America about trying his best to forbid it from gaining any more control than it had.  The result of that…although most will not admit it was a Brexit from the European Union for the United Kingdom that was under it’s stranglehold and choking its’ last life’s breath! 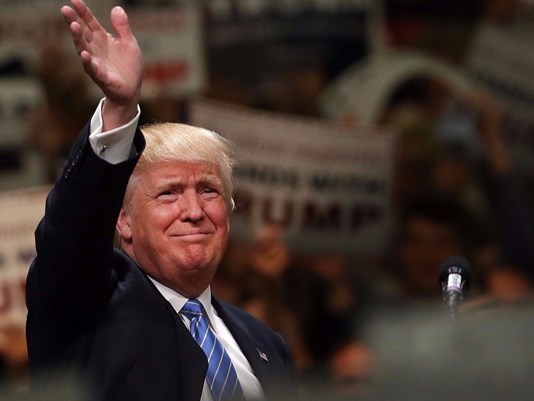 I believe Trump had a lot to do with the restoring of the United Kingdom’s resolve as well as each and every one of the Trump supporters!  Each strong stance we took opened eyes at home and abroad.  Each strong voice and stance was a victory in proportions….we knew not.  To continue on and keeping on will bring about such strong stances of change or shall I say a return to greatness that we had no idea was possible!

It is time to stand strong in our resolve and move forward pushing and shoving every obstacle out of our path!  We have a God sent leader…stand with him and push like you have never pushed before!  We are reclaiming our nation and God is with us all!  Thank you our fellows across the pond…..we are strong with you and thank you  Vladimir Putin  for standing up for what was common sense and right when the world was sleeping and doing every evil thing imaginable in daylight!

Today is a new day.  I stand with DONALD JOHN TRUMP!  To the end!  And the new beginning!

60 thoughts on “America Has A God Sent Leader – Stand With Him – His Name Is DONALD JOHN TRUMP!”