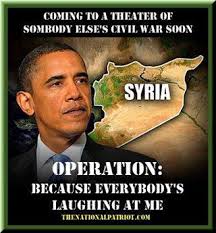 Are we to believe that Obama now has a reason to send in a small number of  special forces? We were told 50 and now they are saying 26?  Are we supposed to believe these are true facts? What is the truth?

If Obama were serious about fighting ISIS would he not send in a larger number of troops?  Or is he just mimicking Putin by sending in special forces….and exactly what else is he sending in and or doing?

Haven’t we had enough of the phony beheading videos?  Does anyone really believe Josh Ernest or any of the White House information?  What is the real motivation for all of this?

Then there is the real question as to why US ships are in the south China sea rallying around the islands in dispute between Japan and China. Shouldn’t that be the headline?

What is Obama doing? Where are the real facts and what is the Pentagon really doing?  What is going on with the refugee program – ISIS coming to America? Where are the hard questions and real answers?

2 thoughts on “NEWS ALERT – What is Obama doing? How many rabbits are we chasing and why?”